Depending on the age of the gestation, these graphs can be used to determine the correct EDD.

Mean Sac Diameter (MSD) measurement is used to determine gestational age before a Crown Rump length can be clearly measured.The average sac diameter is determined by measuring the length,width and height then dividing by 3 . 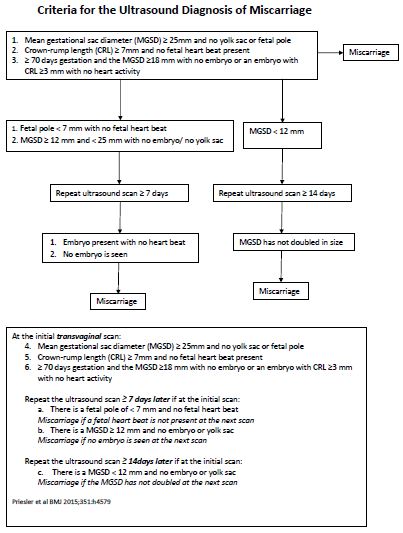 Gestational sac size should be determined by measuring the mean of three diameters. These differences rarely effect gestational age dating by more than a day or two.

The following image is using a transvaginal approach. The gestational sac can often be seen during week 4-5.

Ultrasound image- Mean Sac Diameter measurement is used to determine gestational age before a Crown Rump length can be clearly measured. The average sac diameter is determined by measuring the length, width and height then dividing by 3 .

The very early embryonic heart will be a subtle flicker.This may be measured using M-Mode(avoid Doppler in the first trimester due to risks of bioeffects).Initially the heart rate may be slow.Compare to the maternal heart rate to confirm that you are not seeing a maternal arteriole.

The Crown Rump Length (CRL) measurement in a 6 week gestation.A mass of fetal cells, separate from the yolk sac, first becomes apparent on transvaginal ultrasound just after the 6th week of gestation. This mass of cells is known as the fetal pole.
The fetal pole grows at a rate of about 1 mm a day, starting at the 6th week of gestational age. Thus, a simple way to “date” an early pregnancy is to add the length of the fetus (in mm) to 6 weeks. Using this method, a fetal pole measuring 5 mm would have a gestational age of 6 weeks and 5 days.

The yolk sac should be circular with a hyperechoic rim and anechoic centre.

Sometimes there is difficulty distinguishing between the maternal pulse and fetal heart beat. Often sonographers will take the mothers pulse or doppler a maternal artery at the same time to check if it is the fetus or the mothers .

In at least some respects, the term “crown rump length” is misleading:

There is no fetal crown and no fetal rump to measure for most of the first trimester.

What is really measured during this early development of the fetus is the longest fetal diameter.

From 6 weeks to 9 1/2 weeks gestational age, the fetal CRL grows at a rate of about 1 mm per day.

Ultrasound image- A normal 8 week foetal pole. You should see a definable head and body. The beginning of the limb buds. The fetal heart should be easily visible. Subtle body movements can often be seen.

Ultrasound image- This is a foetus at 10 weeks gestation.

There is significant change with features of the foetus more discernable.

Ultrasound image- This is a normal sonographic appearance of a midgut herniation.
There is out-pouching of the anterior abdominal wall with a small portion of bowel encapsulated by a membrane within the base of the umbilicus. It usually measures between 4 and 7 mm.

The 2 sacs are clearly visible.

The outer chorion with the developing placenta and the inner amnion which will “inflate” with the production of fetal urine,to adhere to the chorion obliterating the residual yolk sac.

The normal small mid-gut hernia into the cord is still visible.(pink shading). This is the result of normal midgut proliferation and will resolve by 11 weeks as the fetus lengthens. This physiological occurrence should not be confused with an omphalocele.

Ultrasound image- The fetal face has begun to take shape. Look for symmetry.

Ultrasound image- Measure the crown rump length (CRL) to estimate gestational age. The rhombencephalon of the developing brain is visible as a prominent fluid space posteriorly. This should not be mistaken for neck oedema or other pathology.

The legs are usually crossed at the ankles. Confirm the presence and symmetry of the long bones in Ultrasound image.

Ultrasound image- The humerus, radius and ulna and the presence of hands are imaged from 11 weeks

Ultrasound image 12 week choroids take up most of the space within the ventricles.

A 1st trimester series should include the following minimum images;