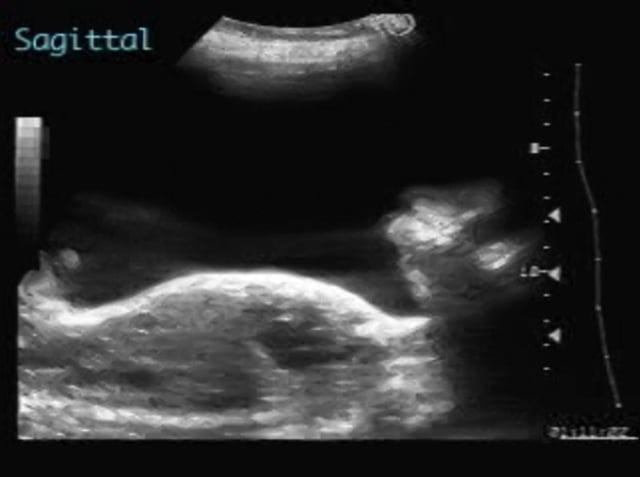 Agnathia
The presence of polyhydramnios prompts a targeted scan of the fetal face looking for evidence of impaired fetal swallowing . Severe micrognathia/agnathia is readily apparent. A subjectively small oral cavity is seen in a fixed open position. The fetal tongue is not visible. A small dysplastic ear completes the range of facial anomalies.

Mandibular agenesis or complete absence of the mandible. Complete agenesis is a rare event and the definition is often extended to include the most profound forms of micrognathia. However, agnathia and micrognathia probably have different aetiologies. Sex ratios appear to be equal, with no particular ethnic or racial predilection. Clinically two variations of this structural anomaly are recognized with differing aetiologies. Agnathia may be seen in association with holoprosencephaly and cyclopia, a lethal variation that often is associated with microstomia, absent tongue, other brain malformations and abnormalities of the ear such as anotia or synotia. Defective induction of prochordal mesoderm with deficiency in neural crest cell formation, migration and/or proliferation has been suggested as a possible pathogenetic mechanism for agenesis of the mandible with abnormal development of the prosencephalon. Agnathia without holoprosencephaly is also recognized. It is much rarer and less severe. It is also often accompanied by multiple facial defects i.e., microstomia, cleft lip/palate, aglossia, blind mouth and ear anomalies. This latter form has been attributed to defective formation of the first branchial arch, secondary to anomalous neural crest migration or proliferation.

Evaluation of the fetal profile in sagittal section often provides initial clues to the presence of agnathia. Virtual absence or profound retrusion of the fetal chin may lead to a preliminary diagnosis of severe micrognathia. Lack of identification of the ossified mandible in the usual scanning plane, i.e. on longitudinal section from the temporomandibular joint to the symphysis menti, confirms the diagnosis. Three dimensional ultrasound may also be useful to demonstrate the abnormalities more precisely. Other facial anomalies, especially those involving the lower face, the mouth, (e.g. microstomia) and tongue (e.g. aglossia) may also be seen. Polyhydramnios is always seen in agnathia due to impaired fetal swallowing or a blind-ending mouth, secondary to a persistent oropharyngeal membrane. The importance of targeted sonographic examination of the fetal face is again emphasized whenever increased amniotic fluid is discovered. The diagnosis of agnathia on prenatal sonography should also direct referral for delivery in a tertiary care centre with appropriate prenatal paediatric surgery or otolaryngology consultation as emergency tracheostomy is often required in these neonates to establish an adequate airway.

Severe micrognathia may be difficult to distinguish from agnathia