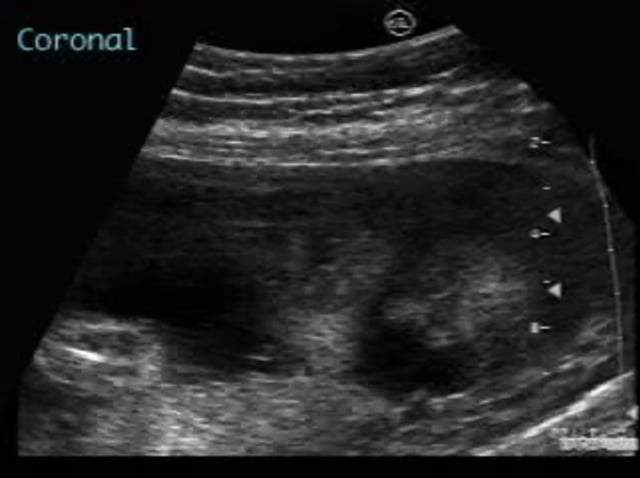 Anophthalmia
In this case of holoprosencephaly, median facial cleft and normal karyotype, attention is drawn to the orbital images. Marked hypotelorism, fused eyelids and inability to image the globe and lens in the third trimester suggest anophthalmia.

Anophthalmia is the apparent absence of the globe in an orbit that otherwise contains normal adnexal elements. The eyelids are structurally normal but are shorter. The birth prevalence is 0.60 per 10,000. Anophthalmia may occur because of lack of development (primary) or early arrest of differentiation (secondary) of the optic vesicles. Histological (autopsy) examination can distinguish between the two and can exclude severe microphthalmia. True or primary anophthalmia is rare and results from failure of the optic vesicle to bud from the cerebral vesicle; the optic nerves and tract are usually absent or rudimentary. Secondary anophthalmia is more common since eye rudiments are often detectable. It is frequently associated with severe abnormalities of the forebrain, particularly holoprosencephaly and other midline defects. It has been suggested that a spectrum of manifestations exists, ranging from total bilateral anophthalmia through cystic formation to extreme microphthalmia. Clinical anophthalmia may be unilateral or bilateral. When unilateral, there may be contralateral microphthalmia. Isolated anophthalmia, when inherited, is usually autosomal recessive. Anophthalmia may also be a component of multiple malformation syndromes.

Although orbital imaging is not routine in most centres, and is not included in the AIUM guidelines for obstetrical ultrasonography, the bony orbits are reliably imaged when scanning the fetal face from the twelfth week onward, although care must be taken to avoid tangential cuts through the orbits. The lenses and the hyaloid arteries can be seen clearly at 15 weeks. With the head in the occipitotransverse position, the transducer can be placed in two possible planes, firstly, along the coronal plane, approximately 2 cm posterior to the glabella-alveolar line, or secondly, along the orbitomeatal line, approximately 2 to 3 cm below the level of the biparietal diameter. In both these views, the midline, orbital rings, nasal processes, and portions of the maxilla can be demonstrated. The inner and outer orbital diameters are measured from the leading edge to falling edge; outer from lateral border of one bony orbit to lateral border of the other bony orbit, inner from medial border to medial border. Occasionally, when the head is in this position, it is difficult to define the distal orbital margin accurately because of acoustic shadowing from the nose. With the head in the occipitoposterior position, a biparietal diameter cannot be obtained. However, the orbits can be identified and measured with the transducer placed in a plane that transects the occiput, orbits and nasal processes. Measurements should only be obtained when the fetal face is perpendicular to the uterine wall, since measurements in an oblique plane may be unreliable. The optimal view of the fetal eyes on transvaginal ultrasonography is a transverse section of the fetal skull at the orbital plane. The eyes within the bony orbits are detected as bilateral hypoechoic circles superolateral to the nasal bones. In addition to the bony orbital dimensions discussed above, direct measurement of the vitreous and lens circumferences can be performed, utilising transvaginal ultrasonography until 17 weeks gestation and transabdominal ultrasound between 18 and 37 weeks gestation. The eye is evaluated in the coronal cranial-facial view with the probe positioned lateral to the orbit. The probe orientation is adjusted until the lens appears as an annular structure within the anterior portion of the orbit, and a maximal diameter of the vitreous is found. The transverse and superoinferior diameters are measured from inner edge to inner edge, while the lens diameter is measured from outer edge to outer edge. A search should be made for associated midline brain anomalies, and growth retardation. Oligo and polyhydramnios are more often present in pregnancies with eye malformations.

Anophthalmia must be distinguished from cryptophthalmia, where the normal or small globe is hidden behind fused or absent eyelids.