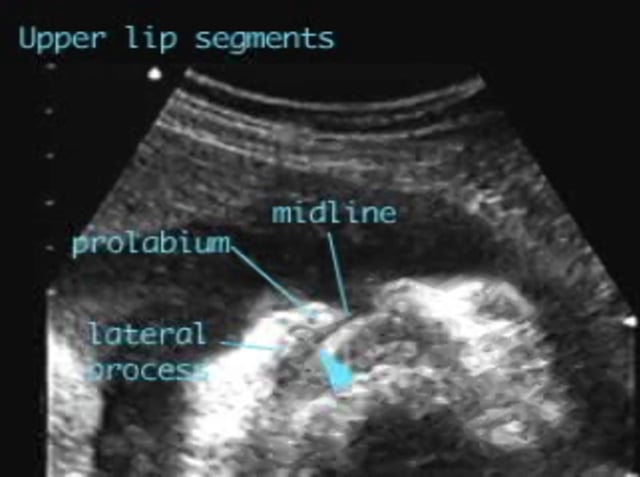 arhinia
Atypical facial cleft secondary to aberrant closure of the neural tube leading to cephalocele positioned between right eye and right side of nose with resultant right microphthalmia, absent right side of nose and atypical median cleft lip with normal lateral process.

Absence of all nasal structures [arhinia] is almost invariably seen in association with holoprosencephaly. There may be concomitant cyclopia, ethmocephaly or midline cleft lip. The correlation between face and brain in holoprosencephaly suggests an intimate relationship between the developing prosencephalon and the neural crest cells which give rise to the frontonasal process. Variation in severity may occur because of differences in magnitude, timing or susceptibility. Occasional examples of arhinia, without holoprosencephaly are reported, often in association with hypoplasia of the maxilla and a highly arched palate. The nasal cavity is completely absent and there is bony choanal atresia. All cases have been sporadic. Rare features accompanying arhinia have included iris coloboma, microphthalmia, hypertelorism, meningocele or submucous cleft palate. Unilateral absence of nasal structures has also been described. One nostril is absent and may be replaced by a proboscis, skin tag or blind dimple. The ipsilateral eye may be microphthalmic, absent or anomalous. Orofacial clefting is rarely associated.

The spectrum of anomalies accompanying holoprosencephaly are best appreciated ultrasonographically if several planes are visualised. The sagittal plane evaluates the fetal profile, including forehead, nose, upper and lower lip and jaw. This view is the most useful in identification of a proboscis or absence of nasal structures. A coronal view through facial structures involving both orbits, maxilla and the anterior portion of the mandible in one vertical plane will reveal single, fused or closely spaced orbits, abnormalities of sphenoid and ethmoid bones and the integrity of the nose and lips. A transverse or axial plane slightly caudal to the one commonly used for determination of the biparietal diameter will evaluate the orbit(s) and upper lip. Orbital biometry can be performed in this plane. Recently, a new technique of three dimensional ultrasound visualization using surface and volume rendering has been developed. The application of this technology may enhance imaging of the fetal face and resolve some of the difficulties inherent in distinguishing between the malformations of the cyclopia-cebocephaly-ethmocephaly-midline cleft face spectrum.

All nasal structures are absent

The midline of the upper lip is missing – absent prolabium

Rarely there is unilateral absence of nasal structures