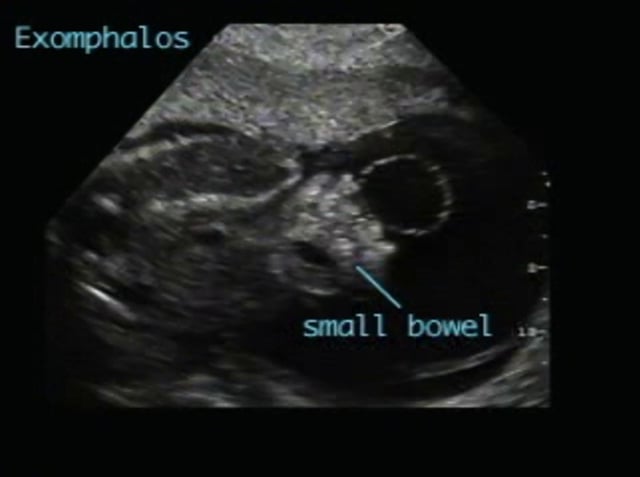 Beckwith-Weidemann
The bowel is externalised and located into a parietal peritoneal sac. Note the excessive amount of fluid in the herniation. The tongue occupies the complete width of the palate suggesting macroglossia.

The condition is usually sporadic although families cases have been reported. The major anomalies include macroglossia, abdominal wall defects, hypoglycemia, visceromegaly (liver, spleen, kidneys, adrenals) and gigantism. Other important clinical features are the ear creases or pits either on the front or the back of the lobes, often looking like bite marks, nevus flammeus, midfacial hypoplasia and hemihypertrophy. Not all manifestations can be seen at birth and the condition is sometimes difficult or impossible to diagnose in a premature infant (Stratakis and Garnica, 1995) since some cases develops manifestations only at after delivery (Chitayat et al., 1990). Hypertrophy of the placenta and maternal hypertension and proteinuria may be found during pregnancy (McCowan and Becroft, 1994). Chromosome analysis is usually normal but 11p duplications have been found and should be looked for. There are several reports of discordant monozygotic twins, and in these reports there is a 10:1 female:male sex ratio (Leonard et al., 1996). The condition is associated with an increased incidence of certain malignancies, especially Wilms’ tumour, hepatoblastoma, adrenal carcinoma, fibromas of the heart, brain stem glioma, umbilical myxoma, ganglioneuroma, carcinoid tumour of the appendix, rhabdomyosarcoma, adrenal adenoma, lymphoma, pancreatoblastoma and hepatic haemangioepitheliomas (Drut et al., 1992). The overall risk of malignancy is 7.5%, and if hemihypertrophy is absent, closer to 10%. Screening for Wilms’ tumour is recommended by abdominal ultrasound every 3 months until the age of 5 years and then yearly until growth is complete (25% of children with Wilms’ tumour are older than 5 years) (Clericuzio, 1993). There is good evidence that the syndrome can be caused by paternal disomy for the segment of 11p15.5 containing the IGF2 gene and that the maternal allele for this gene is normally inactivated (Henry et al., 1991; Beldjord et al., 1992; Giannoukakis et al., 1993; Ohlsson et al., 1993). In cases with a duplication of 11p15.5 the parental origin is usually paternal (Moutou et al., 1992). Drut and Drut (1996) reported a family where a balanced (10;11)(q26;p15) translocation gave rise to Beckwith syndrome presenting with nonimmune hydrops and placentomegaly when an unbalanced karyotype causing trisomy 11p15 was passed on by male carriers. In familial cases maternal transmission results in a more severe phenotype, suggesting that an over-expression of a paternal gene, relative to its maternal homologue, is a causative factor. Reik et al., (1995) reported evidence for an imprinting mutation in some cases causing the maternal IGF2 and H19 alleles to have a paternal allelic methylation pattern. This meant that IGF2 was expressed from both alleles and H19 not expressed in fibroblasts.

Prenatal diagnosis have been reported and monitoring of the fetal size, organ size and abdominal contour is recommended in pregnancies at risk.