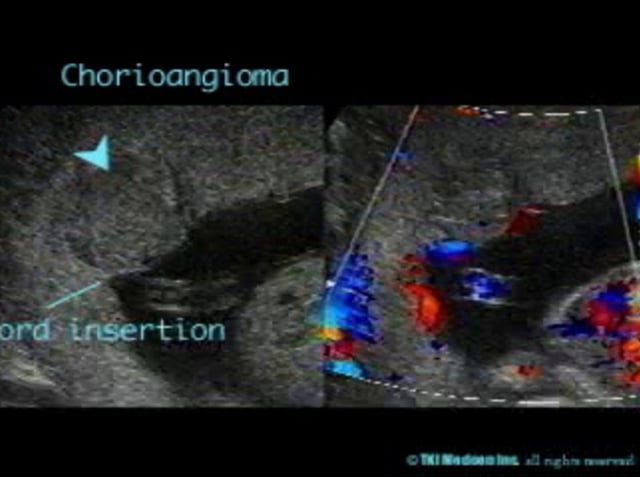 chorioangioma
17.4 week intrauterine gestation. A chorioangioma is present at the level of the umbilical cord insertion. 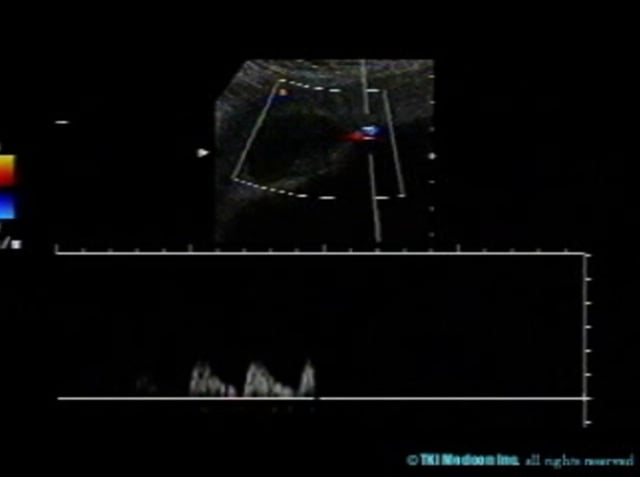 chorioangioma
There is an anterior 4.2 x 2.8 cm placental chorioangioma. At 26.3 weeks gestation an M-mode tracing documents a branch of the umbilical artery at the periphery of the image.

Chorioangiomas are detected in approximately 1% of placentas carefully sectioned after delivery. However, chorioangiomas large enough to be detected sonographically only occur once in every 3,500 to 20,000 deliveries. Most chorioangiomas are encapsulated and intraplacental. As the tumor increases in size, it begins to protrude into the amniotic cavity. Chorioangiomas are most commonly detected around the cord insertion into the placenta. The elevation in second trimester maternal serum alphafetoprotein with placental chorioangiomas is believed to be due to an increased disruption of the maternal-fetal barrier surrounding the chorioangioma.

Smaller chorioangiomas are usually incidental findings. However, chorioangiomas of greater than 5 cm in diameter have been associated with a number of maternal and fetal complications. Non-immune hydrops results from the shunting of blood to the tumor and secondary fetal high-output failure. Fetal anemia, thrombocytopenia, cardiomegaly, congestive heart failure, and polyhydramnios may occur. Preterm labor and intrauterine growth restriction are also common findings associated with chorioangiomas. The degree of vascular shunting to a chorioangioma detected by color doppler correlates with the likelihood of the aforementioned fetal complications. The management of large chorioangiomas has been primarily symptomatic. Serial transfusions have been used to treat fetal anemia and thereby delay the time of delivery until the fetus was viable. In a case report Quintero and colleagues reported interrupting the vascular supply of a chorioangioma via fetoscopic bipolar cautery. Although the procedure was technically successful, the fetus died on the third post-operative day. Additional experience with large chorioangiomas will be required before a definitive treatment plan can be established.

The sonographic appearance of some placental hemorrhages is indistinguishable from a chorioangioma. The presence of arterial or venous flow within a placental mass would support a diagnosis of a chorioangioma. Since a chorioangioma may spontaneously infarct, the absence of flow is not as helpful in delineating between these two possible diagnoses. A placental teratoma or a metastatic tumor should also be considered n the differential diagnosis. Up to 40% of teratomas, as well as metastatic tumors to the placenta, may contain calcifications which are not present in chorioangiomas. Malignant melanoma, breast carcinoma and leukemia are the three malignancies that most frequently metastasize to the placenta.

The presence of arterial or high grade venous flow is diagnostic for a chorioangioma. However, highly cellular or degenerative tumors may have little vascularity.

Large chorioangiomas may undergo degenerative changes, such as necrosis or calcification.

The echo pattern of chorioangiomas varies from being isoechoic with the placenta to having a mixed echodense/echospared appearance based on the degree and type of degenerative changes that have occurred.

A placental teratoma is a rare germ cell tumor that may, on superficial sonographic inspection, resemble a chorioangioma.

Most fetal teratomas consist of cystic and solid components; up to 40% contain calcifications.

Since chorioangiomas do not contain areas of calcification, these two tumors can be differentiated sonographically.