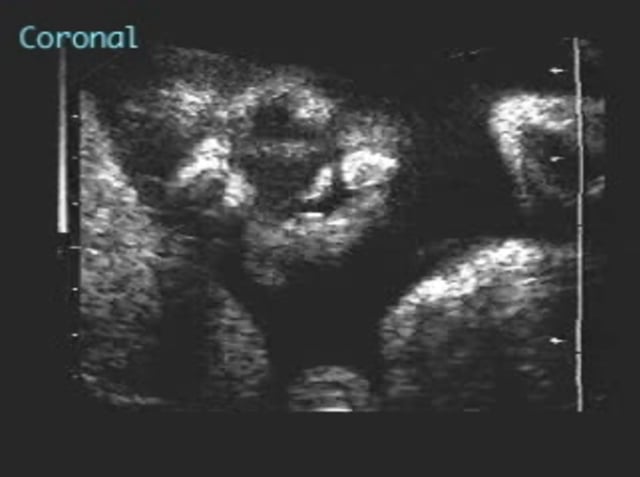 Cleft lip/palate - midline
Frontal scan of the face shows gaping absence of the median aspect of the upper lip and underlying structures is seen with the cleft separating the two lateral processes. A flattened mid-face and nose can be seen due to lack of underlying support structures such as alveolar ridge and palate. This spectrum of anomalies in known as premaxillary agenesis. In real time exam, the tongue is seen.

Discontinuity or clefting of the fetal lip involves the vermilion or cutaneous portion of the lip, and results from a partial or complete defect in fusion of the 2 lateral maxillary processes of the face with the central frontonasal process, early in embryonic life. The defect can be as subtle as a notch in the vermilion border or as obvious as a large V-shaped cleft which extends into the floor of the nose. Notable as the most common malformation of the fetal face, cleft lip, with or without cleft palate, is found in about 1 per 1000 live Caucasian births, with significant racial and geographic disparity noted and a 2:1 male predominance. It is more common in children of parents with cleft, may be more common following 1st trimester steroid exposure (as well as other drugs) and with maternal smoking. Cleft lip and palate is twice as common as isolated cleft lip. Clefting of the lip may be unilateral or bilateral, with the majority (75-80%) occurring unilaterally on the left. Associated malformations are far more frequent in cleft lip and palate and cleft palate alone than in isolated cleft lip. In the latter cases, additional anomalies are found in less than 5%; the incidence is at least doubled in the former categories. In recent studies, 15 to 20% of all patients with cleft lip, with or without cleft palate, have been found to have a recognisable syndrome. In the remainder, the aetiology is multifactorial. It has also been reported recently in association with limb abnormalities.

Diagnosis of facial clefting by transvaginal sonography has been accomplished as early as 14 weeks when development of the fetal facial contour is complete. Diagnosis of all types of fetal facial defects may be more challenging in the third trimester with descent and engagement of the fetal head in the pelvis. Visualisation of the face in standard sagittal, paramedian and coronal views is invaluable in aiding diagnosis of clefting. Diagnosis of bilateral cleft lip with or without cleft palate may be suspected when a midline, infranasal, echogenic mass, which represents protrusion of the premaxilla, is imaged on coronal, transverse and sagittal images of the face. This finding may be more obvious than the bilateral cleft and has been a useful diagnostic sonographic sign in 85% in some series. A recent study found the axial view of the toothbearing alveolar ridge of the maxilla to be the most accurate determinant of clefting confined to the lip or involving the palate also. Typically inferior to the nose and somewhat irregular in shape, the echogenic component may be accompanied by a soft-tissue mass seen protruding upward from the upper lip. This premaxillary mass is comprised of soft tissue, bony and dental structures and has been attributed to uninhibited growth of the vomer and premaxillary bones due to interrupted continuity between bone, gum and lip structures. As a consequence, the alveolar process bearing the rudimentary teeth is pushed anteriorly and the midline portion of the upper lip becomes everted and protuberant. Variable severity and location of this mass may result from the pattern of facial and tongue movements in utero. Approximately 15% of fetuses with suspected bilateral cleft lip with or without cleft palate will not manifest a premaxillary protrusion in utero. In these cases, careful scrutiny may reveal a hypoplastic midface. Recent development of three dimensional imaging may allow more accurate diagnosis of difficult cases. Additional anomalies are common, and when found, should prompt karyotype analysis and a search for a single gene syndrome diagnosis.

A midline cleft lip ( premaxillary agenesis) may sometimes be confused with bilateral cleft lip/palate. A hypoplastic midface and other midline anomalies such as holoprosencephaly, arhinia, hypotelorism, or cyclopia may be present. Amniotic bands or limb-body-wall complex anomalies may also present with bizarre or atypical facial clefts. Recognition of the amniotic bands or extrafacial anomalies such as abdominal wall defects, limb defects, renal agenesis, scoliosis and/or absent or short umbilical cords should lead to accurate diagnosis.