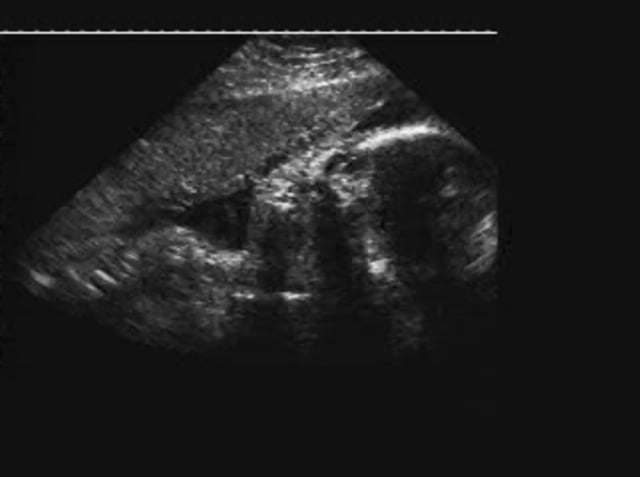 Dacryocystocele
A cystic structure medial and inferior to the eye is seen in this coronal plane. Brief visualisation of a bilateral cleft lip is also demonstrated in this fetus with trisomy 13.

A dacryocystocele is a distension of the nasolacrimal sac, manifesting as a cystic swelling just below the medial canthus, under the inferior turbinate, often associated with nasal obstruction. It is also known as a lacrimal sac mucocele, an amniocele or amniotocele, depending on the nature of the obstructing fluid. Dacryocystocele results from both proximal and distal obstruction of the lacrimal drainage system, with subsequent filling of the enclosed space, most probably by mucous or amniotic fluid. Distal duct obstruction is common, occurring in 30 to 70% of neonates. It is usually asymptomatic. Dacryocystoceles are often bilateral and are more frequently seen in females. The obstructing membrane often ruptures spontaneously, relieving the obstruction by 3 months in over two-thirds of cases. Occasionally, obstruction is overcome before birth, and no evidence of dacryocystocele is present at delivery. The lacrimal tracts take their origin at the level of the caruncles. These 0.33mm openings rest on the lacrimal papillae. They are encircled by a connective tissue ring and by Horner’s muscle to provide permeability of the lacrimal tracts during palpebral closure. The tears then run along the canaliculi to reach the lacrimal sac through the antireflux valve of Rosenmuller. The lacrimal sac drains through the nasolacrimal duct, along which lie several valvular structures. The duct opens into the nasal cavity in the anterior third of the inferior meatus through a thickening of the nasal mucosa called the valve of Hasner. The lacrimal excretory system begins to develop in the fifth week when a thickening of the surface ectoderm appears in the rudimentary naso-optic fissure. As this thickening develops, it separates from the surface and gradually becomes buried in mesenchyme. Canalization of this epithelial cord begins during the third month. The process continues, progressing peripherally, until at 7 months the proximal puncta open. Hasner’s membrane, the coalescence between the distal nasolacrimal duct epithelium and the mucous membrane of the inferior meatus, is the final part of the canal to become patent. This most often occurs in the perinatal period. Distal lacrimal tract obstruction most likely occurs at the valve of Hasner. Proximal blockage may be either at the level of the valve of Rosenmuller, or at the location of the additional valvular structures positioned along the duct.

A dacryocystocele is seen as a hypoechoic mass medial and inferior to the orbit. Small lesions may be obscured by shadows cast by the adjacent medial orbital margin. With the head in an occipitotransverse position, the transducer can be placed in two possible planes, firstly, in the coronal plane, approximately 2 cm posterior to the glabella-alveolar line, and secondly, in the transverse plane along the orbitomeatal line, approximately 2 to 3 cm below the level of the biparietal diameter. In both these views, the midline, orbital rings, nasal processes, and portions of the maxilla can be demonstrated. With the head in an occipitoposterior position, the orbits can be identified and measured with the transducer placed in a plane that transects the occiput, orbits and nasal processes.

Anterior encephaloceles most commonly occur at the midline and are only rarely asymmetric, in which case the affected globe will be displaced downward and outward; one would also expect to find associated skull deformities. Haemangiomata generally display multiple septations or a solid appearance. Dermoid cysts are usually located superolateral to the globe.

A hypoechoic mass, inferomedial to the globe