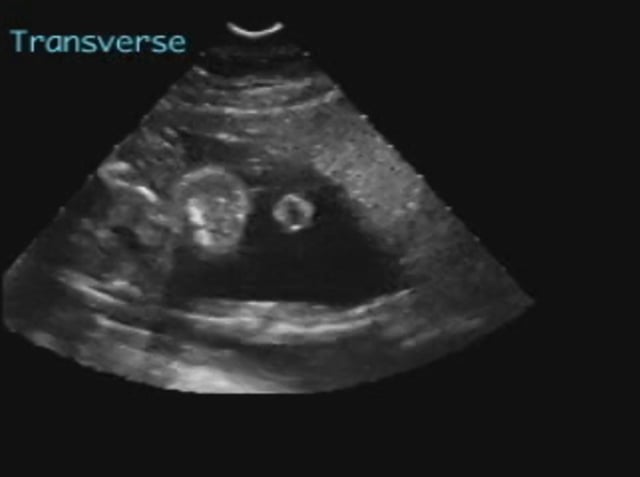 Ethmocephaly
In this midtrimester scan, a proboscis is situated between close set eyes. No normal nasal structures are seen.

Ethmocephaly is the term used to describe a proboscis separating severely hypoteloric orbits, generally associated with marked microphthalmia and absent nasal structures. The nasal bones, maxilla, nasal septum and turbinates are missing, the lacrimal and palatine bones united. Ears are usually lowset and malformed. Ethmocephaly is morphologically closely related to cyclopia, and both malformations predict alobar holoprosencephaly. As in cyclopia, there is a predilection for affected females. Ethmocephaly is the least common facial subtype in a spectrum of ocular and facial malformations which result from the abnormality in the development of the forebrain and frontonasal process which leads to holoprosencephaly. The eyes, orbits, and most of the midfacial structures may be absent; the eyes and orbits may be normally formed but closely set, with a single nostril, or the facial malformation may fit into the spectrum between these extremes. The correlation between face and brain in holoprosencephaly suggests an intimate relationship between the developing prosencephalon and the neural crest cells which give rise to the frontonasal process. Variation in severity may occur because of differences in magnitude, timing or susceptibility. Less frequently, a proboscis is not associated with ethmocephaly and holoprosencephaly. A lateral proboscis is offset from the midline and represents incomplete formation of one side of the nose. The individual is usually otherwise normal, although there may be an associated cleft palate. When both nostrils are normally formed, an additional proboscis may occur secondary to the presence of an accessory olfactory placode. Rarely, the proboscis is located lateral to the outer canthus.

The spectrum of anomalies accompanying holoprosencephaly are best appreciated ultrasonographically if several planes are visualised. The sagittal plane evaluates the fetal profile, including forehead, nose, upper and lower lip and jaw. This view is the most useful in identification of a proboscis or absence of nasal structures. A coronal view through facial structures involving both orbits, maxilla and the anterior portion of the mandible in one vertical plane will reveal single, fused or closely spaced orbits, abnormalities of sphenoid and ethmoid bones and the integrity of the nose and lips. A transverse plane slightly caudal to the one commonly applied for determination of the biparietal diameter will evaluate the orbit(s) and upper lip. Orbital biometry can be performed in this plane. Recently, a new technique of three dimensional ultrasound visualization using surface and volume rendering has been developed. The application of this technology may enhance imaging of the fetal face and resolve some of the difficulties inherent in distinguishing between the malformations of the cyclopia cebocephaly-ethmocephaly-median cleft face spectrum.

In cebocephaly, a flattened nose with single nostril is located below close-set eyes. In cyclopia, a proboscis may be situated above a single eye or fused eyes in a single median orbit.

The nasal bones, maxilla, and nasal septum and turbinates are missing, and the lacrimal and palatine bones united

Ears are usually lowset and malformed