In the normal cicumstance, the superficial system drains the subcutaneous tissues and periodically empties into the deep system via perforating veins.

Flow direction should always be:

With distal augmentation, flow initially goes cephalad. It then refluxes back down the leg through the malfunctioning valve.

An incompetent perforating vein also allows blood to flow from the deep veins to the surface veins.

This combination of back pressure causes dilation and tortuosity of the veins (ie varicosites). 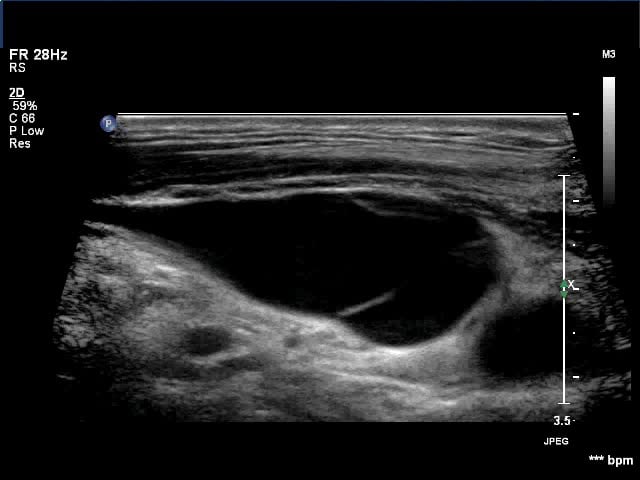 ultrasound of a competent vein valve
Normal competent venous valve as seen on b mode ultrasound. It is important not to mistake this for thrombus. 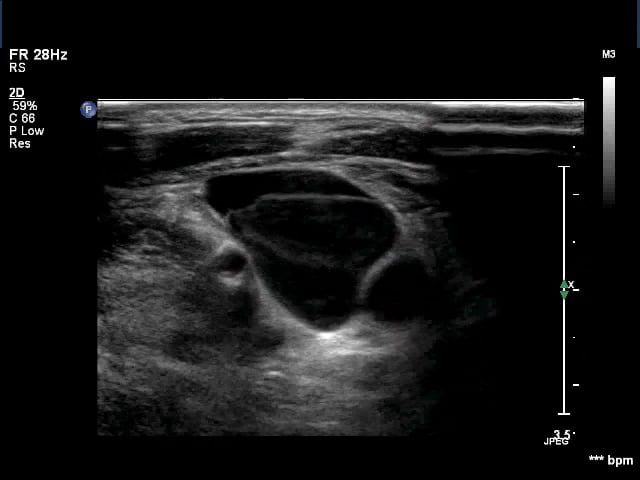 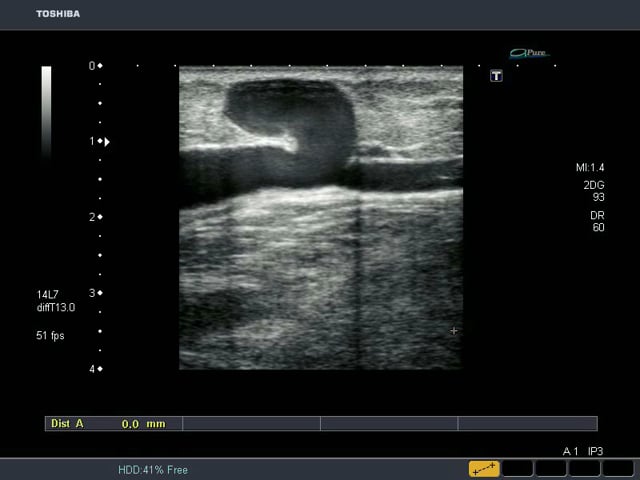 Incompetent vein B mode ultrasound
This swirling slow moving blood is typically seen in veins when using high frequency ultrasound. Colour doppler is unlikely to demonstrate flow due to the very slow velocity not creating a doppler shift within the range of the probe. The to-fro nature of the flow indicates incompetence. 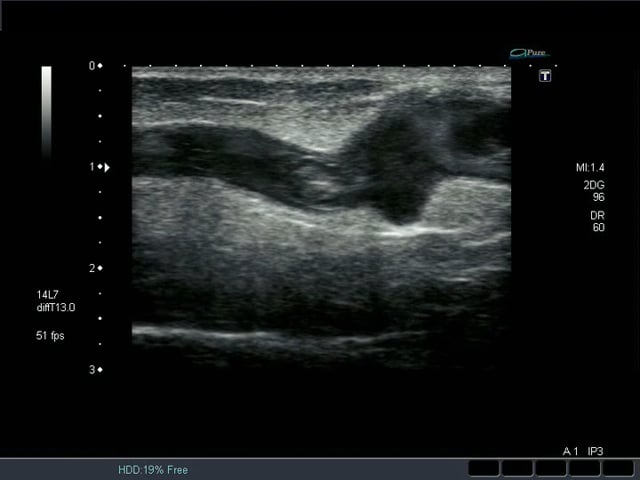 ultrasound mobile superficial thrombosis
Superficial thrombophlebitis on ultrasound. The non-occlusive mobile thrombus is visible inside the vein. There is increase echogenicity of the subcutaneous fat surrounding the vein consistant with fovcal inflammation (phlebitis). 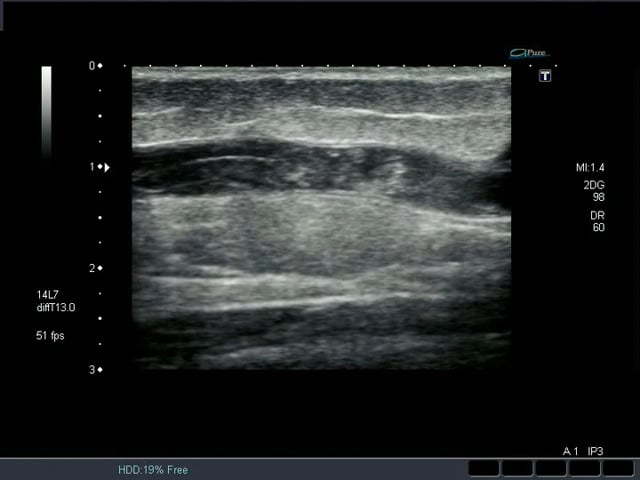 For a comprehensive document on the international consensus of leg vein labelling.

We recommend reviewing this thorough document.

Importantly, to avoid confusion, the ‘Long Saphenous’ is now the ‘Great Saphenous’.

What are Varicose Veins

Below is a basic outline of the anatomy and function of the veins and what constitutes venous incompetence. Be aware however that there are numerous anatomical variations.

The veins contain a series of valves along their course, preventing retrograde flow back down the leg. These valves operate like two plastic doors opening up the leg. If back pressure is applied, they swing closed, pushing against each other, blocking reverse flow down the leg.
If functioning normally, it is a competent valve. If blood is able to pass backwards though the valve, it is deemed incompetent.
Depending on the extent of incompetence, this backflow will dilate the supple superficial veins making them tortuous and dilated(varicose veins).
Causes include:

Are the primary route for returning blood to the heart. They collect the venous blood from all the draining muscular and superficial veins.
In the lower limb the deep veins are: (from groin to ankle)

The Superficial Veins
There are 2 main superficial veins draining the subcutaneous tissue of the lower leg:

The Great Saphenous vein (GSV) runs from the medial malleolus, up the medial aspect of the leg, draining into the CFV at the groin as the Sapheno-femoral junction (SFJ).
The Short Saphenous vein (SSV) runs up the posterior midline of the calf. It may drain into the proximal POPV above the knee crease as the Sapheno-Popliteal junction (SPJ). Commonly however, it may continue up the posterior thigh as the Giacomini vein. This will terminate either into the mid/distal SFV or ascend to drain into the proximal LSV.
Incompetence of the SFJ and SPJ are the two primary sources of varicose veins.

Determine competency and the relationship to the knee crease.
The junction is commonly into the lateral aspect of the popliteal vein.

The Short Saphenous Vein may terminate in the Giacomini vein with no Sapheno-popliteal junction.
Alternatively it may divide, with a normal SPJ and a Giacomini vein (as in this case).

NOTE: A comprehensive thorough scan can take an hour to complete.

Sometimes referred to as the Long Saphenous vein (LSV).

In transverse, scan in a methodical patternup and down the medial calf. Begin with the toe of the probe on the Tibia and do vertical sweeps until you reach the SSV.

Flow should always be superficial to deep (competent).

A CVI study should include the following minimum images: